What is Stiff Person Syndrome?

Stiff person syndrome (SPS) is a rare neurological disorder characterized by fluctuating muscle rigidity in the trunk and limbs and a heightened sensitivity to stimuli such as noise, touch, and emotional distress, which can set off muscle spasms (1).

This syndrome was first described as “stiff man syndrome” in 1956 by Moersch and Woltman at the Mayo clinic in the setting of being first identified in a 49 year old man with progressive stiffness in his neck, back and episodic painful muscle spasm and difficult walking. We now know that this syndrome affects both men and woman hence the terminology was changed to Stiff Person syndrome. This disease is rare and it is considered a one-in-a-million diagnosis with an estimate of it occurring in 1-2 per million people, although this is likely an underestimation based on the under-recognition of less severe or atypical presentations. Until recently in 2020, there was also limitation on the commercial availability of antibody testing with glycine receptor antibodies.

Diagnosis of SPS is made based on a combination of patient’s presenting symptoms, neurological examination, antibody testing, and electromyography (EMG). Antibodies that have been associated with SPS include GAD65, glycine receptor antibodies (2), amphiphysin, and DPPX.

Treatment includes symptomatic treatment with antispasmodic agents and immunomodulatory therapy. Immunotherapy is often used given the presumed antibody-mediated disease mechanism, however large, randomized control trials are lacking. Intravenous immunoglobulin (IVIg) is most widely used as first-line therapy and there are small trials that have been shown to provide benefit with improved ambulation, decreased falls and increased ability to perform functions of daily living (3). Rituximab, while still used commonly as second-line therapy failed to demonstrate a statistically significant difference in only a small group of 24 patients (4).

What is Autoimmune/Paraneoplastic Cerebellar Ataxia?

There are no randomized clinical trials in autoimmune or paraneoplastic cerebellar ataxia. Treatment strategies are based on expert opinion and case series. Cancer treatment for patients with paraneoplastic syndromes is critical and the first step in treatment. Immunotherapy maybe used in addition to oncological treatment or in the setting of autoimmune cerebellar ataxia immunotherapy alone is often used to help stabilize or improve neurological symptoms.

What is Transverse Myelitis?

Transverse myelitis (TM) includes a large group of disorders that leads to inflammation causing injury to the spinal cord with varying degrees of weakness, sensory alterations, and autonomic dysfunction. Autonomic dysfunction affects the part of the nervous system that controls involuntary activity, such as the heart, breathing, the digestive system, and reflexes. Wide ranges of causes include infections (often viral infections), post-infectious process (inflammation triggered by the infection and not direct infection of the spinal cord by the virus), demyelinating disease (such as MS, NMOSD, MOGAD – see above), autoimmune or paraneoplastic myelitis (caused by a particular autoantibody), or other systemic inflammatory disease (such as rheumatological disease or sarcoidosis). Diagnostic work up includes imaging of the spinal cord with MRI, blood work, and a lumbar puncture to evaluate for inflammation, virus, and/or antibodies in the cerebrospinal fluid (CSF). 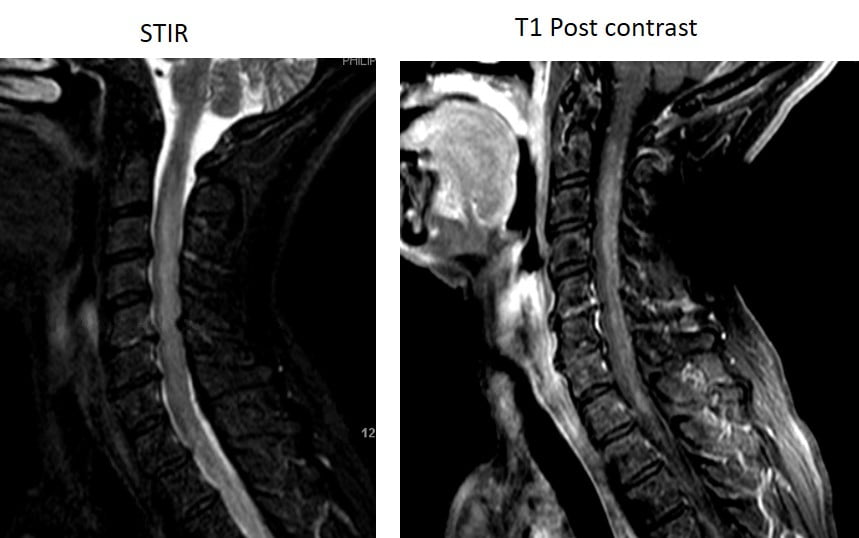 Imaging of transverse myelitis, shown before and after administering a contrast agent.

Neurosarcoidosis can occur when the nervous system is involved in sarcoidosis. Rarely, neurosarcoidosis can occur without any other organ involvement of sarcoidosis. It is a chronic disease of the central or peripheral nervous system and can results in many different types of neurological presentations. Symptoms are quite variable and range from cranial neuropathies (similar to a Bell ’s palsy, among others), chronic meningitis, transverse myelitis, and even strokes. Symptoms vary according to where the inflammation is occurring and sometimes it can look similar to multiple sclerosis.

Often high-dose steroids are used as first-line treatment of sarcoidosis. Other longer-term, steroid-sparing treatment options include methotrexate and/or infliximab.

What is CNS Vasculitis?

Vasculitis is a group of related conditions that cause inflammation in the blood vessel walls. Vasculitis can involve the central and peripheral nervous system; therefore, can case many different types of neurological symptoms. Primary Central Nervous System (CNS) vasculitis is a very rare inflammatory disease that is isolated to the brain and/or spinal cord. Symptoms often include headache, cognitive impairment and stroke syndromes. Secondary nervous system vasculitis may occur in the setting of systemic vasculitis, connective tissue disease, infection, or from drug-induced.

Treatment options may vary depending on whether it is a primary or secondary cause of CNS vasculitis, however the majority of the time steroids with our without the addition of cyclophosphamide are often used in the acute phase.

Rheumatological disease can vary greatly in presentation and can involve the central, peripheral, and/or autonomic nervous system. Beyond neurological symptoms, often there are systemic clues including constitutional symptoms (weight loss, fevers, generalized unwell feeling), muscle and joint involvement, skin involvement, eye involvement, Raynaud’s phenomenon, dry eyes and mouth, and gastrointestinal involvement. Examples of rheumatological disease include Sjögren’s syndrome, systemic lupus erythematosus, and antiphospholipid syndrome. Other inflammatory, systemic disease that can have neurological involvement include vasculitis, neurosarcoidosis, Behçet disease, Vogt-Koyanagi-Harda Syndrome, among many others.  Treatment will depend on the specific rheumatological or inflammatory disease and often requires specialist care including both rheumatology and neurology.

A Note from the MS Center:

The material presented in our Patient Resources section is for informational purposes only and should not be considered a substitute for medical advice. We encourage patients to be informed about their condition and treatment options. Patients should always consult their own physician before altering or commencing any course of treatment.