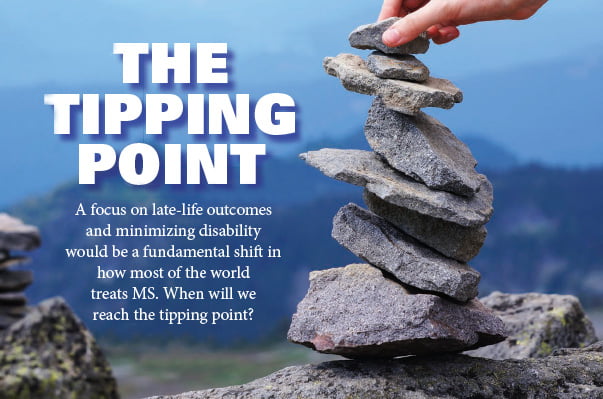 There’s a fundamental difference in opinion in modern MS treatment.

On one hand, we have a treatment strategy defined by what amounts to a “wait and see” approach. In this model, generally speaking, MS is treated as symptoms become evident. When we’re sure someone has MS – usually after confirming with long periods of observation, MRIs and other tests – treatment starts with the aim of mitigating the day to day effects of MS on the patient.

In contrast to that is a newer model, focused on early, effective and aggressive treatment of the disease. The strategy starts with identifying MS as early as possible – in many cases, even before significant symptoms are apparent. Patients are treated with the latest and most effective MS drugs at the very earliest signs of MS, in an effort to slow or even stop the disease before it has the opportunity to do much lasting damage.

Why the disparity? Well, that’s a complicated question. But the field of MS treatment may be on its way to tipping point that will fundamentally change how MS is treated around the world.

Newly published guidelines for MS treatment from the American Academy of Neurology (AAN) appeared the journal Neurology recently, including a series of recommendations for how and when a neurologist should prescribe disease modifying therapies (DMTs).

The AAN’s previous guidelines hadn’t been updated since 2002. With the progress and advancement in DMTs in the years since then – with more than 15 new DMTs coming on to the market in the past 20 years – an update was sorely needed.

But the new recommendations don’t seem to fully consider a developing base of knowledge about MS – the concepts of maximizing lifelong brain health, and limiting the earliest disease activity to prevent long-term damage from MS.

Dr. Timothy Vollmer, Medical Director of the Rocky Mountain MS Center, was a co-author on the 2015 report, “Brain Health: Time Matters in MS.” Headed up by lead author Dr. Gavin Giovanni, Chair of Neurology at the Blizard Institute, Barts and The London School of Medicine, the report was developed by some of the leading minds in MS from around the world . The main recommendation of that report is that the goal of treating MS should be to preserve tissue in the central nervous system and maximize lifelong brain health by reducing disease activity.

This far-reaching concept is also the basic strategy of treatment that underpins the work of the medical team at the Rocky Mountain MS Center at University of Colorado. Years ago, this may have been a departure from the normal course of MS treatment, but was undertaken with good reason and good evidence.

“We’ve been thinking about maximizing lifelong brain health for six or seven years,” says Vollmer. “based on our increasing understanding of loss of neurons in MS and how important they are in determining disability.”

The brain has a built-in capacity to compensate for injury or damage, including the damage caused by MS. When an area of the brain is compromised, this “neurological reserve” essentially acts as a buffer, working to make up the difference. This concept of neurological reserve is a key component in our understanding of brain health.

“Right now, we have good evidence that shutting off inflammation more completely improves outcomes in a major way,” says Vollmer. “And we have reasonable evidence that patients on more highly-effective therapies have a much better chance of actually improving symptoms if they have relapsing-remitting disease – many even appear to be in disease remission.”

And we have a number of highly-effective disease modifying therapies today that can do just that – dramatically slow MS, or even stop it in its tracks. For most MS patients, highly-effective treatment options at the earliest stages of their disease, coupled with maintaining an active lifestyle and eating healthfully is the best way to protect their neurological reserve and maximize their lifelong brain health.

“The reason we focus on maximizing lifelong brain health is it emphasizes the need for a comprehensive approach,” sayd Dr. Vollmer. “We know that exercise and an active lifestyle build neurological reserve, and build more connections between nerve cells. We know that avoiding comorbidities like diabetes and hypertension helps minimize disability in MS patients, because those diseases also stress neurological reserve, and that just magnifies the effect of MS.”

In the field of stroke treatment, they say “Time is Brain” – we know from experience that the faster someone can be treated when they’re having a stroke, the better chance they’ll have to avoid serious and lasting effects.

We know that time is an incredibly important factor in MS as well. In stroke, the time we’re talking about is minutes. In MS, the time we have is much longer – weeks or months — but it’s no less important.

Understanding all this, the Brain Health report called for major policy changes, chiefly regarding early diagnosis and effective treatment, aimed at achieving the best possible outcomes for people with MS and those who care for them.

What’s Wrong with the AAN Recommendations?

The guidelines published by AAN fall short of advocating early and aggressive treatment of MS, and instead take a more conservative approach. They focus on educating patients on their treatment options, and while they include DMTs in that discussion, they stop short of recommending a particular course of action.

Furthermore, there’s no mention of the concepts of brain health or neurological reserve in the new guidelines, concepts that are central to the early and effective treatment model advocated by the Rocky Mountain MS Center and the authors of the Brain Health report, among others. “And as a result, we’re missing an opportunity to fundamentally change what this disease is going to do to people in one generation,” says Vollmer.

Treatment approaches in MS have certainly changed over the years. It’s not so long ago that there were no effective drug treatments at all, but in the past 15 to 20 years, a tremendous amount of progress has been made. There are now more than a dozen effective treatments approved for MS, and over the years they’ve become increasingly effective, reliable and relatively safe. But treatment strategies haven’t always kept pace with advancements in the available DMTs.

In short, AAN’s lukewarm approach toward early and effective MS treatment is in contrast to what we know about the most modern DMTs – they’re relatively safe when prescribed properly, effective in slowing or even stopping MS progression, and offer the best chance at improving long-term outcomes in MS.

“The guidelines just continue to muddle thinking in the field about treatment,” says Vollmer. “It’s missing the opportunity to help guide treating physicians in the direction of using these drugs in the most effective way to minimize disease activity and minimize risk.”

DMTs aren’t without their issues. Side effects can range from minor annoyances to serious medical complications, but all evidence points to those serious complications being extremely rare when DMTs are prescribed appropriately. The risks associated with these drugs must be weighed against the risks of allowing MS to progress.

“Theirs is still a conservative approach, this concept of ‘doing no harm’,” says Vollmer. “But it misses the point that you can do harm by not treating the disease when you have the chance, just as much as doing harm because of the side effects of a drug. You have to think about the actual magnitude of those risks in order to make a reasonable risk-benefit analysis.”

The fact is that the AAN’s recommendations reflect the way most of the world treats MS today. As more MS specialists and general neurologists see the data, see the results, and begin to understand the benefits of shifting their treatment approach, the field itself will begin to shift as well.

There’s a parallel story in the field of rheumatoid arthritis (RA). A decade ago, there were lots of new and effective treatments emerging, and there were accepted guidelines for arthritis specialists that basically were the same as this: they didn’t give any clear guidelines about how best to use these new drugs.

For years, RA doctors treated symptoms, and increased the aggressiveness of therapy as a patient’s symptoms got worse. With new and more effective treatments, their strategies began to shift.

A similar shift is beginning in MS treatment, led by the authors of the Brain Health report and leading MS specialists around the world – including the Rocky Mountain MS Center.

“That’s where MS needs to go. We have the data, we have the tools – and in fact, we have more tools than RA had at the time,” says Vollmer. “If we could just get people to change their way of thinking, to focus on late-life outcomes and how to minimize late-life disability, then we would go through that fundamental change as well. That will be the tipping point.”

DMT Webinar – Learn more about the latest advancements in disease modifying therapies in “A Deep Dive in DMTs,” a webinar presented by Dr. Vollmer, available in our Webinar archive. 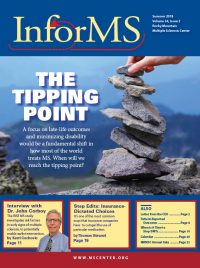 Medical appointments tend to be too short to address all our concerns and care does not always feel patient-centered. In an effort to reme-dy these common experiences and give patients...

This issue of InforMS describes the serious efforts of expert physicians to identify the best strategies to treat people with multiple sclerosis. Unfortunately, however, there is another critical decision maker...

DISCO MS: When is it Time to Stop?

One of the most difficult decisions for someone who’s been living with MS for a long time is whether or not to discontinue their treatment with disease modifying therapies (DMTs)....

As we develop treatment strategies that rely on early diagnosis, it’s more important than ever that we identify MS as quickly as possible — and that means watching for common...

There’s a fundamental difference in opinion in modern MS treatment. On one hand, we have a treatment strategy defined by what amounts to a “wait and see” approach. In this...