Home » Articles » How MS Can Change Over a Patient’s Lifetime

In the past, MS was commonly divided into four separate forms or “types” of the disease. Today we think of MS as one distinct disease, with different symptoms from person to person, but also changing manifestations over the course of the lifetime of a single patient. There is still debate as to how distinct or different these forms of MS are from each other, but it’s nonetheless useful to look at these four categories as a way to explain how MS manifests at different stages in different people.

Clinically Isolated Syndrome (CIS) refers to essentially the first outward, clinical signs of the disease, or the first relapse. Commonly this is between the ages of 20 to 45. Typical symptoms might be numbness, or visual disturbance such as optic neuritis. If a person never experiences another exacerbation, or their MS does not progress or get worse over time, this singular event is said to be CIS. Most patients will eventually experience another exacerbation, in which case they fulfill criteria for a formal diagnosis of MS.

Relapsing-Remitting MS (RRMS) is diagnosed in someone when they have a second attack and/or new changes on MRIs over time. Typically, these would affect different parts of the CNS, and then an individual would formally fulfill criteria for MS. Up to 85% of people diagnosed with MS have relapses when diagnosed. For most with RRMS, relapses and new MRI changes are most common when they are younger, and risk of new relapses diminishes with age.

Secondary Progressive MS (SPMS) manifests about 10-15 years, on average, after a diagnosis of RRMS. Some (but not all) will begin to more overtly show signs of slowly worsening symptoms unrelated to, or in addition to, relapses. This may be manifested especially with greater walking and cognitive problems. Men, and especially those with very active relapses when first diagnosed, are at higher risk of developing SPMS. We now recognize that CIS, RRMS, and SPMS are all “relapsing” forms of MS.

Primary Progressive MS (PPMS) is diagnosed when someone has a steady progression of MS symptoms that is not preceded by relapses. Average age of onset is similar to those with SPMS, which is about 40-45. Followed long enough, a minority of those with PPMS could have a relapse. 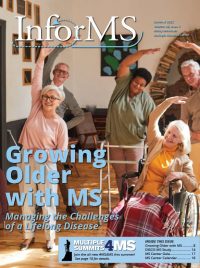